I had an idea for a new way to visually set you into the writing mode, by providing something I will call, Visual Story Prompts.

So it works like this: I’ll give three pictures, and you will create the story that weaves the mesh between these three different picture items.

I took a page out of Oliver Sacks book entitled, An Anthropologist on Mars. The nonfiction work documents a meeting he had with Temple Grandin who has Autism. But the interesting part about her is, the unique way in which she perceives and processes our shared world. This is the case for many individuals who face issues of Neurodiversity – Ms. Grandin rarely if ever thinks in words, but in pictures.

For most of us, communication in words is intrinsic to being human. Imagine what her world consists of devoid of words, words that ultimately facilitate essential human communication and the abstraction that language provides the majority of us with. This alternative way of understanding the world has allowed her to have a very unique way of perceiving what is.  (Also to note, Albert Einstein was a visual thinker too.)

2. A going away party, a well-traveled suitcase and a bell on a hotel desk check-in.

3. A rustic camping trip, a bunny and a roll of duct tape.

4. A pink wig, a bottle of white wine and a tin trash can. 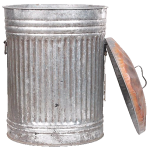 6. A businessman, a stopwatch and a luggage arrival carousel with people ridding on it.

7. An old purple door, a stack of old books, and a man reading by a lake.

8. A map of Canada highlighting the province of Manitoba, an Army jeep and a soldiers footlocker.

9. An old Canadian $1 bill, Parliament Hill in Ottawa, and a plate of Poutine.

10. A red Toronto Sun newspaper box, The City of Toronto, and a Twix chocolate candy bar.