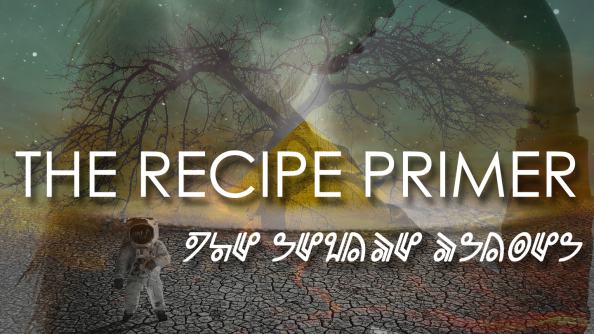 “How much for this old recipe book?” I inquired.

“I’ll give it to you for $5,” The kiosk attendant replied.

I unfolded a five dollar bill from my wallet and paid the man. The notebook had a handsome brown leather book sleeve around it. I smelled it. The mixture of old paper and leather was intoxicating. But I was more curious about the gold cursive inscription on it that read, M.L. Von Braun. El Paso, Texas was full of old NASA relics. I crossed the bazaar and made it out to my station wagon parked on the south side of the arena entrance. I sat in my car and thumbed through the contents of the book, various recipes from American cookery were in it. As I was flipping through it, my fingers got caught on a rectangular ridge in the inner fold of the cover. Something was wedged between it and the notebook. Like a small piece of paper, folded many times over.

I looked around the edges of the leather book cover. It appeared to be stuck, or glued in place. Almost as if someone was hiding something in there. I ran my fingers along the crease to feel if there was a place I could gently remove the sleeve from the recipe book.

I found a loose corner and removed the leather cover. Out popped a folded brownish piece of paper onto my lap. It was old. Probably from the 1930’s. Written on the paper in a thick black ink, was a quote from Plato with a peculiar script underneath it, written in a language I didn’t understand:

I rummaged around in my handbag for my cell phone. Mike would know what this was. He was an expert in NASA historical articles and antiques. I dialed him on my iPhone and left him a message:

“Hey, it’s Sabrina. I found something at a bazaar here in El Paso. I believe it’s a recipe book belonging to none other than Werner Von Braun’s wife. There’s a strange note I found in it, with what appears to be, sounds strange, alien script along with a quote from Plato. Call me back.”

I tucked the recipe book and the note back into my bag and drove back to Las Cruces. On the way back through the desert I kept starring up the sky. I wondered what that strange script was below the quote. And why hide this note, in all things, a recipe book? It couldn’t have mattered that much for someone to hide it there. Or maybe it did. Maybe it mattered a lot. I pulled into the driveway and turned off my car, checked my phone and saw a text from Mike.

“You back in New Mexico yet?”

“Yep just pulled in the driveway,” I texted back.

“Cool. I’d have to look at the recipe book in person but I’d say you have something very special on your hands. I’ll be down your way on Monday. I’ll stop by and look at it.”

“Could I send you a scan of the recipe book cover and one of the note? It would give you some time to research it.”

“Sure. Send it to my email: mikesmithson@unm.edu.”

I grabbed my car keys, locked the car and headed inside. My cat Fudgsicle greeted me at the door.

I patted her and ran my hand down her pudgy little body petting her soft Calico fur. She purred.

“I got something special at the antiques bazaar today…”

I threw down my bag by the door, locked it then went into the kitchen.

“You hungry? Me too. Oh! My bag can’t forget it and the treasure inside it.”

I winked at her, ran back to the door and brought my bag into the den. I placed the recipe book on top of my printer-scanner. Fudgsicle followed me in.

“Maybe we should scan this now before I make supper? Yes. Let’s do that.”

I turned on my computer, waited for it to boot up. The printer made a beeping sound to signal it was online. I scanned the front of the leather cover with the initials on it and scanned the page with quote and the odd script.

“Sent! Let’s have some dinner, Fudgy.”

After eating super and sitting down to watch some Netflix, my cell phone rang. I answered it. It was Mike.

“This is amazing what you’ve found. So the short story is, many of these types of notes have been showing up all over the south west in various objects and even old furniture that belonged to Werner Von Braun and his wife Maria Luise. Usually at auctions or antique bazaars. Often they carry a quote, either from key philosophy people or in the case I found, literary genius William Shakespeare. Here, sending you this one I found online. It’s been decoded, apparently a primer for all that weird script to be able solve them all. But yours appears to be the final message found. The script is actually using Latin sayings. Got it yet?

“Some of the messages contain very graphic, even war like sayings. Or a juxtaposition with what’s said in the quote. Some have been terrifying. You’ll notice that one is the primer and has been deciphered as this Latin saying: ab ovo usque ad mala, from the egg to the apples, ‘from beginning to end’. Notably a more positive one than the many other notes found. Think thus far it’s been about fifteen notes found so far. A few, including yours remain unsolved.”

“Wow. Wait—why are they in Latin though? I mean Von Braun was German, a Nazi brought over in Operation Paperclip if I remember correctly. So why a dead language?”

“That’s the strange thing about them all. They all seem to be connected to alien or extraterrestrial clues of some sort. The Nazis were interested in validating their dysfunctional ideals of them being a race that was extraterrestrial or alien. How they became delusional relating it back to even fictional Atlantis, Plato like in your quote, as them being a superior race not of earth and why they committed atrocities such as the Holocaust, no one knows. Terrible mobs, group think gone awry and just horrible people? I don’t know.”

“I’m just amazed. From one small recipe book… Think I’m going to put it in the safe until you arrive on Monday.”

“Might be a good idea. Keep it safe and keep yourself safe too. Give Fudgy a pat from Uncle Mike too. See you then!”

I pushed, “end call”. Grabbed the recipe book from the scanner-printer and locked it in my safe.

I will be continuing this story into the next few weeks :)