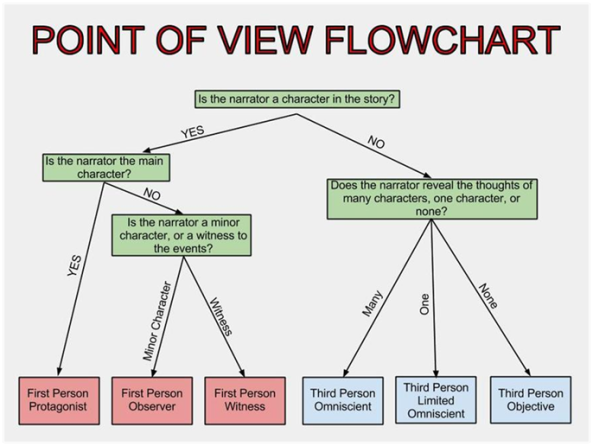 Ever read a story, novel or poem and wonder why you’re unable to identify with it? Perhaps you decide to stick with it and struggle through reading it. But now you’re left unsatisfied with how it was told to you. What exactly was the issue with it, why couldn’t you just get into it? Sometimes it’s as simple as the Point of View it was told to you in. The point of view an author chooses to write their prose will ultimately determine how successful or unsuccessful the story is with its readers.

Let’s begin with the basics. If you already know these, this will be a quick review for you before diving into Deep Narrative Point of View.

Writing with Jane: Point of View

The Basics of Point of View:

“I walked into the store and bought an apple.”

Deliberately misleads the reader by omitting certain important things about the story and its characters.

Tells/shows only what the characters said and did, without any commentary leaving it up to readers to imagine exactly what’s happening.

A narrator looking back on past events often with the benefit of hindsight.

First Person accounts by several different characters in the storyline.

The narrator recounts the story as a memory like a stream of consciousness.

The narrator tells the story like it is, often drastically and without interruption. It’s also sometimes referred to as a soliloquy.

A narrator writes down the events as they happen, often formatted like a letter or a series of letters exchanged between characters or a diary of some sort. Sometimes the story is told as if it were journalism or creative nonfiction.

“You walked into the store and bought an apple.”

Rarely ever used in short stories and novels; mostly this POV is relegated to poetry, prose and song lyricism. A good example that breaks this rule is the 70’s-2000’s classic, Choose Your Own Adventure books. These books only ever used second person narrative.

“He/She/They walked into the store and bought an apple/bought apples.”

The author writes a single character who’s an eye witness for the story.

Here the author denies entry to any of the characters thoughts or feelings by only describing, without any emotion nor editorializing, what the characters say and do.

All-Knowing the author tells the story from all perspectives, in this author’s persona the story can develop in any way of several directions.

Whoever the POV is for a particular scene determines what the story is or the persona is.

The author steps in from time to time to supply the necessary information but otherwise stays in the background.

This narrator persona has a distinct attitude toward the story’s characters and events then frequently comments on them.

First-Person POV vs. Third-Person POV: Which is Right for Your Book?

Deep Narrative Point View or Deep POV as it’s often referred to is one of the most difficult skills to conquer in fiction writing. It’s a highly abstract concept that removes the author completely from the storytelling. They’re never seen nor heard from. And this is why this technique is so deep: it’s almost as if there’s no author but rather you’re witnessing the story told through the characters. The best deep POV does just that. You wouldn’t even know it was written by an author at all other than you know you’re reading words off a page. It’s so profound that when used correctly, in Third Person Narrative, it’s almost as if the writer has written the story in First Person Narrative. But remember when writing in first person, this also doesn’t necessarily constitute deep POV either.

11 Tips To Keep In Mind When Using Deep Narrative POV:

Writers In The Storm Blog: http://writersinthestormblog.com/2014/10/diving-deep-into-deep-point-of-view/

Originally published on Page to Pixels.